What does poor messaging costs

I became a new breast cancer survivor during the 2020 election season.  Although still in treatment and pandemic quarantined I was inspired by the changing world’s response to George Floyd’s murder. Indeed, riveted by healthy folks, young folks, and finally fed-up white folks, I wanted to be part of it.

At the same time, the Lincoln Project’s videos emerged. These former Republicans weary of the Maga Agenda are producing “attack ads” to defend democracy. They push the kind of hard-hitting, yet truth-telling messaging I knew progressives needed to engage voters. So, I thought I can do that!  Create a video that stumps for an issue that matters to me close to home.

That 2020 issue was the repeal of Prop 209 which banned affirmative action. A Yes vote on Prop 16 would restore measures that minimize discrimination.

Of course, after 24 years of banned racial equity, gains made by women and people of color disintegrated.  The losses cost quantifiably 1.1 billion in contracts according to impact study results.

Things like worldwide social justice protests and systemic health disparities don’t happen unless there is a need for leadership and better economic justice policy.  My health crisis was magnified because I was unable to work.  Consequently, my health crisis was also a financial crisis like so many others at this time. Particularly, black and brown people and of course women.

Ironically, while California has one of the most progressive reputations in the nation.  Its current governing policies like CCRI ban affirmative action as if equality already exists for all races and genders.  Centuries of women and people of color being denied a chance at state-funded employment, contracting or college admissions are ignored.

So, when glaring disparities for racial groups are identified, they’re benignly neglected because California’s institutions are prohibited from providing race/gender-based relief.  Even when years of discrimination and bias are its cause.

Effectually, rather than preserving proven programs that minimize inequities, the law maintains discrimination as the status quo for 40 million Californians.  Coincidentally, California’s state population reached a majority-minority in 1997, the same year Prop 209 was enacted.

Meanwhile, in 2020 when Assemblymember Dr. Shirley Weber announced Prop 16 going before voters. She amplified a shift in focus away from college admissions to the losses and lack of fairness in public contracting.  I welcomed the disruption and quickly prioritized her suggestion in my research and scripting of the video.

I always felt proponent messaging for affirmative action was off. Public contracting roots the conversation in collective impacts for all Californians. Like the building or maintaining of public goods – highways, parks, libraries, etc. Instead of the easily distorted college admissions discourse. Where myths of individual merit perpetuate stereotypes. Thus, deform political ads and news media coverage on this subject.

That’s why opponents centered their affirmative action political attacks on college admissions in 1996 and 2020.  Picking one aspect of the issue where unfair race-based quotas are already outlawed by the US Constitution – race cannot be the sole determinant in college admissions or public employment.

So doubling down on anti-affirmative action with Prop 209 was unnecessary.  Certainly, it caused a “sharp decline” in admissions and enrollment of underrepresented student groups.  Such that the publicly funded University of California (UC) “still does not reflect the diversity of California’s population” said the UC Office of the President when Prop 16 failed.

Poor Messaging Persists At the Expense of the Disadvantaged

Neither do public contracting awards.  Equally fraught with a shifty policy climate, political opponents, deep-pocketed rivals, and legal challenges. Prop 209’s affirmative action limits erased hard-won public contracting gains for women and people of color in California.  By 1989, contract procurement for these groups was at 0%.  Because affirmative action is a swift effective disparity-reducing tool, by 1994 contract procurement for underrepresented groups rose to 25.3%: 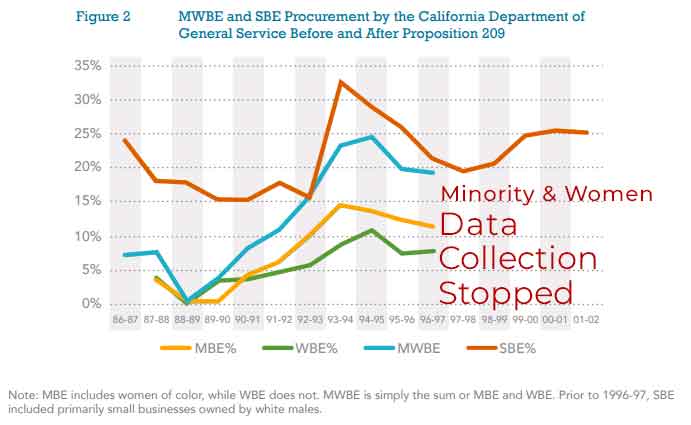 It’s noteworthy, that state contracts with small businesses owned by white men, rose and fell along the same trajectory.  Which logically indicates they were vulnerable to the same big monied adversaries as minorities and women-owned businesses. However, smaller businesses owned by white males had some percentage of state contracts from the start. As a result, they reaped even greater benefits during affirmative action, before its Prop 209 demise.

What’s worse, is people of color and women are paying for racial and gender bias discrimination.  As Eva Patterson, President of the Equal Justice Society puts it  “Taxes from women and people of color help fund public contracts, but are denied equal opportunities to obtain those contracts. We often tout the great economic engine of California, and public contracting is a major part of fueling that engine… Proposition 209 denied Black, Latino, Asian American, and women-owned businesses equal opportunities to contribute to our state’s economic growth.”

Still, conversations focused on college admissions in the run-up to the 2020 election. And yet, rarely do the costs and losses of excluding the majority of taxpaying Californians from public benefits get discussed. However, when I pointed it out on a social media thread, there was no response:

My other portfolio projects discuss and feature creative skills or the process of client work.  Nevertheless, creating this personal interest political video challenged me to build skills. Explore messaging strategy, and translate a lot of research into cause communication that briefly tells a full story to educate voters.  In doing so, I realized the whole progressive movement needs a coordinated new messaging strategy.

Speaking of which, timing is paramount. More time to organize, educate and mobilize media campaigns to repeal Prop 209 can’t be an afterthought.  In fairness, Prop 16 emerged suddenly just 5 months before the 2020 election.  Seemingly, caught off guard proponent’s planning and coordination of communicating Prop 16’s impact was diminished.  That said, supporters outspent opponents of Prop 16 and still lost.

To further prove my point about too little lead time, a cursory look at one social media channel, the Yes on Prop 16 Tik Tok account shows an insignificant number of posts, 3 to be exact:

More than that, ballot language and advocacy messaging were significant problems.  Overwhelmingly, Latino Community Foundation’s research showed Latino voters support affirmative action and found the ballot description confusing. The report conducted by Latino Decisions showed only 39% of Latino voters surveyed understood that a yes vote would restore affirmative action.  I’ve seen it more simply said, but you can judge the Ballotpedia description below for yourself:

How to Change Poor Messaging and Attitudes

Additionally, as affirmative action activists rally supporters they too often encounter a public ignorant of the real impacts of not having it.

Hurling accusations that left-out groups “can’t compete on merit,” never mind how many haven’t been given a chance to compete. Accusers, whether naive or deceitful, narrow the scope of all voters’ economic interests by spouting rumors. To hypocritically say nothing of overrepresented groups’ invisible affirmative action-ish networks called wealthy friends, family, and nepotism. Guess we all need a little help.

In any case, unpacking the false arguments and distorted debates shown above can help create better messaging to change attitudes.

Cutting through the noise, Heather McGhee is doing inspiring work that’s useful for discovering fresh language. Her book the “Sum of Us” and companion podcast discuss “zero-sum” thinking. Which is, that many white Americans think racial progress takes prosperity away from them. Supported by research, at its core according to Ms. McGhee, it is the inability to imagine we’re all on the same team.

And would be wealthier as a result.

Using “drained public pools” as an example, she evidences historical truths, loss of generational wealth due to racism and bias, and the healing that happens when past mistakes are corrected.

This story-based approach is creative fodder for short teachable voter campaigns. Developing messages expressly for “cross-racial solidarity” in ads.  To educate voters that regardless of race, people with similar concerns standing together achieve greater financial outcomes when “they fight for one another rather than against one another” says Heather McGhee.

As referenced earlier, provable exclusion from government resources by taxpaying groups is another message advocate creators should shout from rooftops.

Together We All Win the Race for Prosperity

Even so, this working poor and middle-class group votes against affirmative action and policies that increase wealth and upward mobility for all groups. In the video that inspired this post, a girl is holding a sign that says, “check your privilege, check your respect.” Needing another group to be worse off than yours denies everyone basic human dignity and impoverishes us all.

Including high-wage earners, businesses, and entrepreneurs, because rather than growing the economic pie, it shrinks it.

It’s provable according to a 2020 racial inequality analysis by Citigroup.

Affirmative action is actually recommended. Yes, its reputation is a bit battered as expected with our debates over the last sixty years. But, we shouldn’t give up on what works. Just because we need a way of talking about it that reflects our growth. A rebrand.

Evolving sources are providing valuable new narratives and new ways to share them. Like, The League, a civic engagement team of culture changers. And, E Pluribus Unum speaks about equity and justice to community members and collaborators in southern states.

Understanding that collectively we have a responsibility to participate to the best of our ability. But, our government at all levels exists to solve problems we can’t individually. That’s why reasonably all taxpayers are entitled to the fruits of its benefits and remedies.

For instance, I never saw breast cancer coming. It was for me personally what the pandemic was for us collectively the world over. The government’s quick economic response made a tangible personal difference in all of our lives. Be it small business and multi-million corporate PPP loans. Or stimulus checks filling gaps of “non-essential” job loss.

Crisis makes it clear we’re all in this together. A perspective that remains true whether we’re in crisis or politicking about whether economic policy will benefit a few or many.

On that final note, people of color and women deserve affirmative correction. A more apropos name, perhaps a reminder of the policy’s purpose so its promise of prosperity doesn’t get lost.